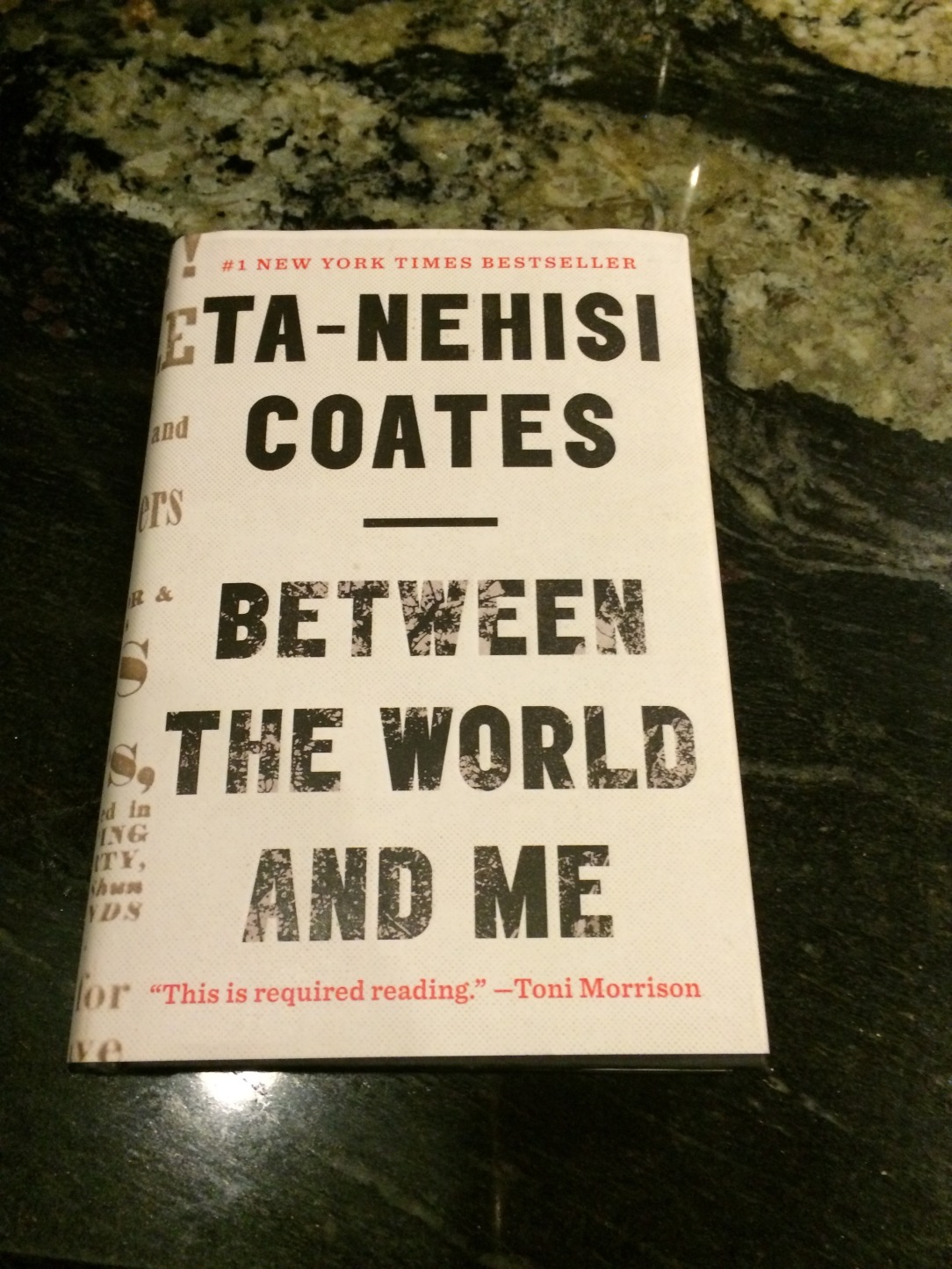 Wow.  This book.  So much has already been written about Ta-Nehisi Coates’ Between The World And Me, some of it cringeworthy bad, like David Brooks’ response: http://www.nytimes.com/2015/07/17/opinion/listening-to-ta-nehisi-coates-while-white.html and some of it revelatory, like Roxane Gay’s conversation with the author: http://www.barnesandnoble.com/review/the-charge-to-be-fair-ta-nehisi-coates-and-roxane-gay-in-conversation, but I think it is important to listen to the lyric power of Coates’ work unmediated by what you may have heard,  because here, in this slim yet monumental work, Coates is speaking truth.

Written as a letter to his fifteen- year- old son, Between The World And Me is also a polemical letter to humanity in which Coates explores how he came to understand the “problem” of his body–not just the exclusion of African-Americans from every aspect of white-centric society, but also the centuries of physical disembodiment through slavery, the Middle Passage, racism, redlining, and brutality by the police of African-Americans.  The millions of deaths at the hands of these instigators is symbolically rendered in Coates’ writing of the death of his Howard University fellow student, Prince Jones, who was shot and killed by a policeman who had chased him through three jurisdictions, a case of mistaken identity turned tragic when Jones, finally stopping two blocks from his mother’s house, and getting out of his car, was shot and killed by the policeman who claimed Jones was a threat to his safety.  Jones’ only transgression was driving while black.

When Coates also writes of  the many other African-American men who have recently been killed at the hands of police and  whose deaths were unjust, this further represents the loss of body that he experiences–growing up in the ghettos of Baltimore, he could have easily been any one of these men who have been killed–and that the discrimination  against African-Americans economically, socially, and culturally is the manifestation of white America’s obsession with the “Dream,” a manicured and exclusionary life in the suburbs that keeps out all except white America.  This is the basis for Coates’ apocalyptic vision of the end of all things–climate change caused by total reliance on the car because the “Dreamers” have fled to the suburbs in their attempt to keep out African-Americans.  Coates writes, ” And the method of transport through these new subdivisions, across the sprawl, is the automobile, the noose around the neck of the earth, and ultimately, the Dreamers themselves” (151).

Another extremely interesting part of the book is Coates’ story of his own education, and how he came to leave the dangers of inner-city Baltimore to attend Howard University and to partake in the intellectual life there that he calls the “Mecca.”  He writes so clearly about his development as a writer and thinker, and especially about how writing poetry helped him develop what he calls “the craft of writing as the art of thinking”: “Poetry was the processing of my thoughts until the slag of justification fell away and I was left with the cold steel truths of life” (51-52).

There is deep thought here and “the cold steel truths of life,” a life that denigrates all people with non-white skin, and yet great generosity in Coates’ realization that African-Americans haven’t been the only people to be discriminated against: “Perhaps there had been other bodies, mocked, terrorized, and insecure.  Perhaps the Irish too had once lost their bodies.  Perhaps being ‘black’ had nothing to do with any of this; perhaps being named ‘black’ was just someone’s name for being at the bottom, turned to object, object turned to pariah” (55).

And then rounding back to his son, Coates writes about how much his son’s life has changed since his own growing-up within the oppression of ghetto life, and yet so much has remained the same.  Coates is fearful for his son’s body too, and the direction that these racially motivated killings in America are taking now. Yet what matters is understanding how love and connection must from the basis for life, as difficult and dangerous as this can be: “…soft or hard, love was an act of heroism” (61).

Read this book.  Read it as an impassioned letter to a son, a statement of belief, an historical document, a plea to humanity, and a mirror held up to the world.  You will understand why Ta-Nehisi Coates just won a MacArthur and National Book Critics’ Awards.  But just read it–we all must.