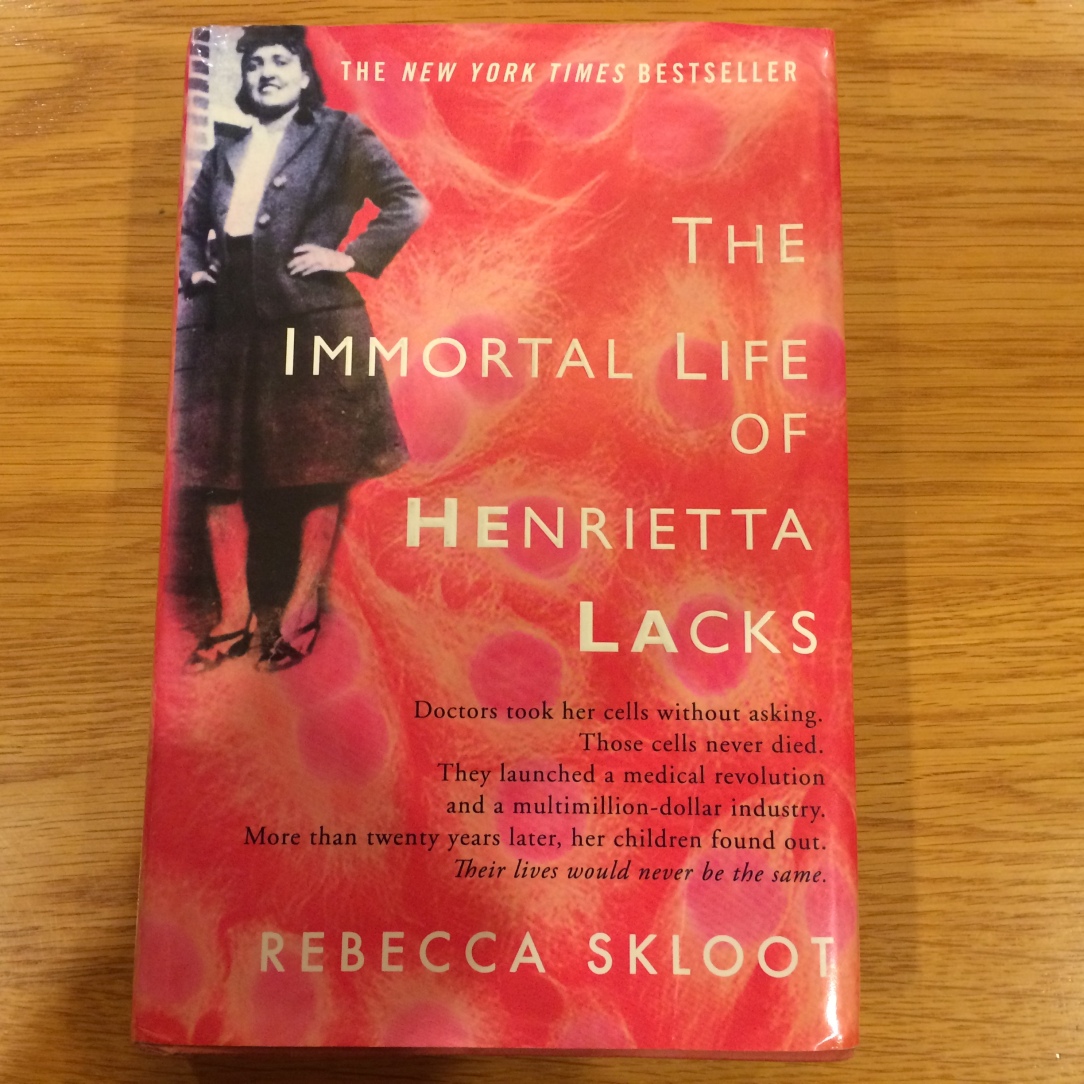 I’d been meaning to read this book since last Thanksgiving when my sister-in-law gave it to me and told me I had to read it immediately (that didn’t happen!), but it had disappeared from my bookshelves at home only to turn up in my husband’s lab on a shelf above his bench. He hadn’t read it either, but it has to do with the basics of his cancer research, and he has used HeLa cells throughout his scientific career.  Science isn’t my passion the way it is for my husband, and I haven’t taken a science course since ninth grade biology, but Skloot’s book is so well-twritten that someone like me with a limited technical understanding can still understand every point she makes.

Henrietta Lacks suffered from a virulent form of cervical cancer that killed her at age 31, leaving a family of young children and a bereaved husband.  Samples of tissue from the multiple tumors that caused her death were found to have a particularly strong and vigorous ability to grow cells in culture without dying–this happened at a time in the history of science when researchers were struggling to establish cell lines that could be studied and also manipulated in the quest to find cures for not just cancer but many other diseases as well.  The cells grown from Henrietta Lacks became indispensable to science since they grew rapidly, and this led to the beginnings of the biotech industry.

As significant as HeLa cells are to science today, there arose a crucial ethical question that still has resonance today: who owns these bits of discarded tissue and cells, and who profits from discoveries made through the use of these cells?  Henrietta Lacks and her family were struggling to stay above the poverty level, and her death caused her family to spiral into the chaos of inner city Baltimore life.  Skloot questions the judicial decisions that upheld the right of scientific institutions to conduct research using these cell lines generated from Henrietta without compensation to the people like Lacks from whom the bits of tissue came from.  And she reveals the utter disregard many of these early researchers had for Henrietta and her descendants, and the way Lacks was treated as not a person but an opportunity for scientific advancement, generating papers, new drugs, and new treatments, all benefitting everybody but the Lacks family who had suffered such a tragic loss.

However, what saves the situation is the magnanimity of Henrietta’s children and grandchildren, especially her daughter Deborah, and their realization that even though they would never receive any payment for their mother’s cells, what is much more important is acknowledging the advances that were made through the use and study of what she left to science.  Here is Deborah Lacks speaking about the poor treatment she and members of her family received from many researchers:” Like I’m always telling my brothers, if you’re gonna go into history, you can’t do it with a hate attitude.  You got to remember, times was different” (276).

The incidents of horrific experimentation on poor African-American people that Skloot uncovers are unsettling and tragic, and it is not surprising that many were deeply suspicious of the white doctors who were eager to further their research.  That the Lacks family trusted Skloot, a young white woman writer who came from an entirely different background from them is proof of their trust in the power of words to right the wrongs by uncovering the truth.  Henrietta Lacks achieved immortality twice–once through the immense power of the cells cultured from her body, and a second time in the story that Skloot has so movingly told.  This really is an essential book for anyone concerned with the ethics of scientific research, or even the morality of how we treat people whose sufferings have led to great advances for us all.