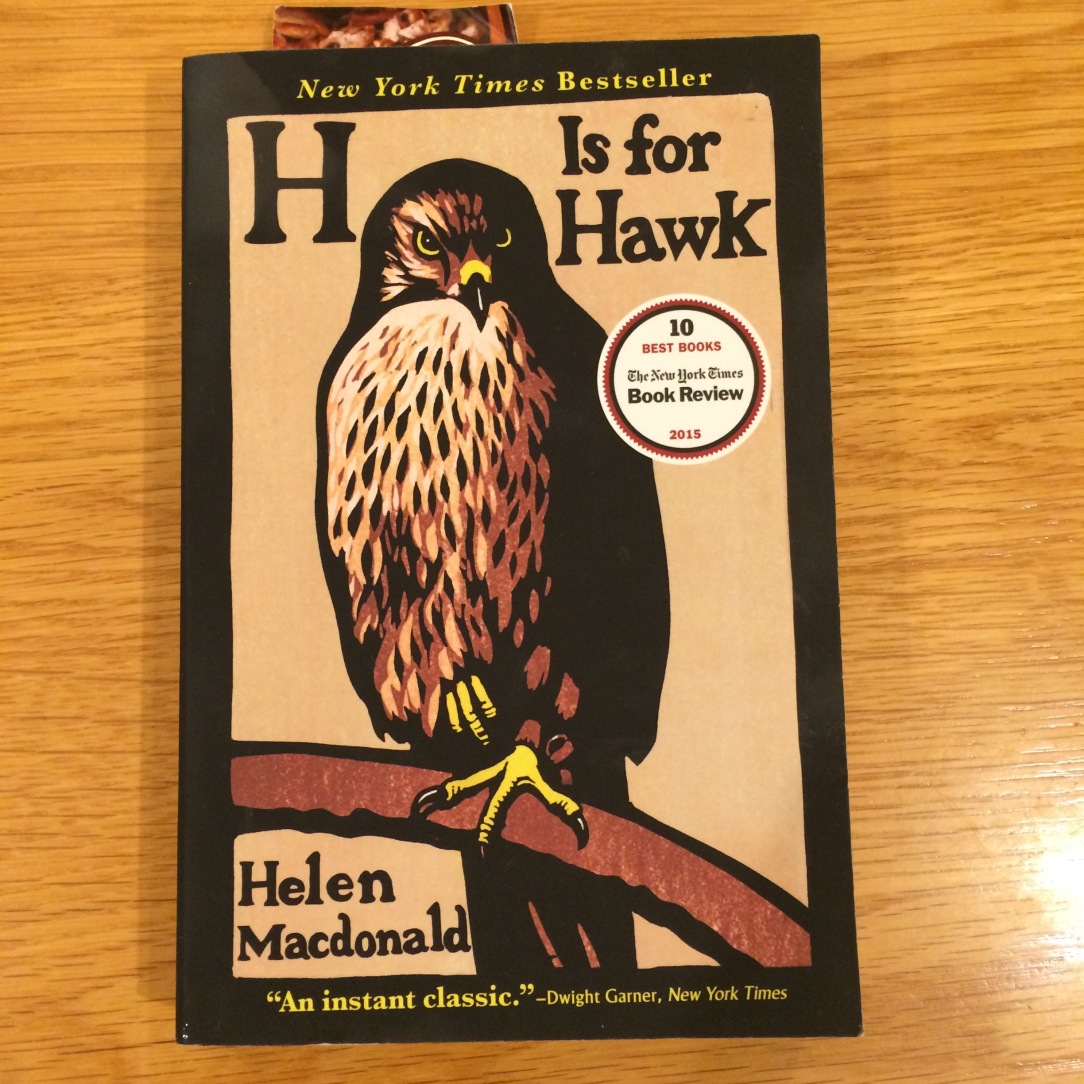 “Hunting Makes You Animal, But The Death Of An Animal Makes You Human.”

I couldn’t have picked a better book to  read after the privileged complaining of Little Labors than Helen Macdonald’s H Is for Hawk. This is a memoir that succeeds at both demonstrating compassion for all living creatures, and also entering into the natural world that we so often take for granted, a world in which the rules of engagement may be different, and  yet still reflect back upon the emotional symbiosis underpinning all life. How better to move away from Rivka Galchen’s post-ironic detachment that has her calling her child a “puma” and a “chicken”–animalizing the human–towards Helen Macdonald’s so much more enlightened and humbling acceptance of the human in the animal–and of herself, too, in her struggle to reframe the impact of her father’s sudden death.  MacDonald names her goshawk “Mabel. From amabilis, meaning lovable or dear,” and her memoir is the story of how Mabel enters her life and lifts it beyond her grief for her father, her tenuous academic position, and her deep and grieving questions about her own personal significance.

Macdonald gives the reader an intimate view of her struggles with Mabel. By interweaving elements of T.H. White’s own memoir from the 1930’s about his experience training a goshawk of his own–which goes terribly awry because of his misunderstandings of both animal and human behavior–and with forays into the history of falconry over thousands of years, Macdonald allows the reader to enter into the intensely special world she has created between Mabel and herself. She writes so poetically of her experiences and difficulties in training a goshawk, and yet there are comical parts too: walking around Cambridge, England with a hawk on your fist isn’t exactly an everyday sight, and yet Macdonald revels in both the apartness that Mabel gives her and also the belonging to an ordered living world in which death is a natural occurrence.

She writes of falling into a deep depression following her father’s sudden fatal heart attack that is compounded by the end of her three-year term as a Cambridge Fellow (which seems to be like an American non-tenured adjunct professor): “When Alice dropped down the rabbit-hole into Wonderland she fell so slowly she could take things from the cupboards and bookshelves on the walls, look curiously at the maps and pictures that passed her by. In my three years as a Cambridge Fellow there’d been lectures and libraries and college meetings, supervisions, admissions interviews, late nights of paper writing and essay-marking, and other things soaked in Cantabrigian glamour…now with a hawk on my hand, I knew I had always been falling as I moved past these things.”

MacDonald writes so movingly about the overlapping nature of our human lives and their intersection with the natural world: “We carry the lives we’ve imagined as we carry the lives we have, and sometimes a reckoning comes of all the lives we have lost.” Mabel also helps Macdonald accept the hierarchy of life and death in the animal kingdom; death is accepted, required, even, as a hawk navigating the environment: “I stare at the hawk as she grips the dead pheasant, and her mad eyes stare right back at me. I’m amazed. I don’t know what I expected to feel. Bloodlust? No. Nothing like that…I look at the hawk, the pheasant, the hawk. And everything changes. The hawk stops being a thing of violent death. She becomes  child. It shakes me to the core. She is a child. A baby hawk that’s just worked out who she is. What she’s for. I reach down and start, unconsciously, as mother helping a child with her dinner, plucking the pheasant with the hawk. For the hawk….And I start crying, soundlessly. Tears roll down my face. For the pheasant, for the hawk, for Dad and for his patience, for that little girl who stood by a fence and waited for the hawks to come.” (p. 184)–what a difference from the mistaken idea that an animal or child is an encumbrance, a stumbling-block, or a burden!

By the end of the memoir, we as readers begin to see the world from Mabel’s view, high up in the air. This is how Macdonald moves towards her own transcendence, away from the ineluctable reality of death–her father’s, the pheasant, T.H. White and his hawk, her own childhood–and in the direction of acceptance of things as they are. This is an absolutely beautiful book that opened my eyes to a world I knew nothing about–my personal definition of an excellent work that teaches as well as expresses–that absolutely should not be missed.

1 comments on ““Hunting Makes You Animal, But The Death Of An Animal Makes You Human.””