Paterson: the movie, the poem, the place 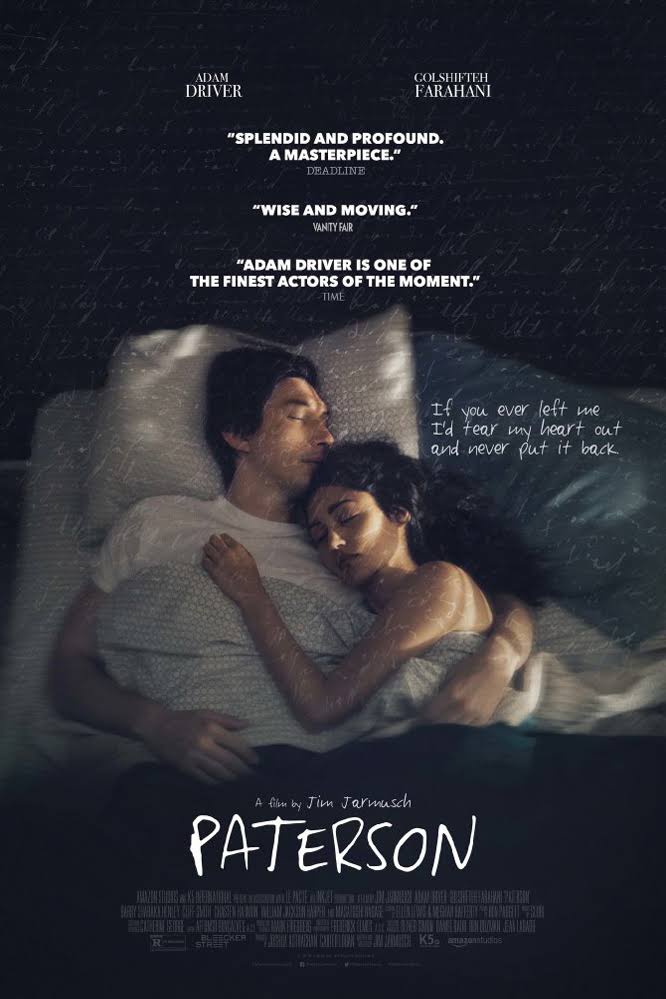 I finally got a chance to see the movie Paterson, but I had to travel 326 miles to a movie theater in Princeton, New Jersey (not too far from Paterson, New Jersey) just to get a chance to see it before it disappears into video release. Granted, I was going to Princeton for the weekend anyway to see my kid’s dance company spring show (and I’ll write about this genre-blending hip- hop/contemporary dance group of diverse college students finding context for street culture within the very definite confines of Ivy-league privilege in another post soon), but there it was–in the center of town, the art house movie theater, showing Jim Jarmusch’s Paterson, and we had a free Saturday night, my traveling companion/ husband and I, so we bought some cookies and mixed nuts, and found two seats in the mostly not-too-full theater, and settled in for the show.

I’d been very eager to see the film, mostly because I can’t remember ever seeing or hearing about a movie that has to do with poetry, the solitude of being a poet, and that features actual poetry scrolling across the screen (the poet Ron Padgett wrote the poems that the movie’s main character, also named Paterson, is writing).  And also because the movie has to do with the historical presence of William Carlos Williams, who wrote an epic poem called–you guessed it– “Paterson,” five volumes of poetry inspired by James Joyce’s Ulysses.  Williams was born in and spent his entire career as doctor and poet in the town next door, Rutherford, N.J.  And so Paterson stands in for the kind of small town on the edge of an urban megalopolis, where ordinary people live their lives, and yet what they do every day, the methodical dailyness and routine of 9-5 work elevates the commonplace to the poetic, just as William Carlos Williams found unnatural beauty in broken glass behind the hospital walls.

Paterson, the character in the movie, played by Adam Driver, is a bus driver and aspiring poet in Paterson, N.J.  He lives in a tidy house away from the center of the city with his partner Laura and their French bulldog Marvin.  The movie is framed by a week in Paterson’s life, a routine that is fixed and yet open to Paterson’s wandering imagination as he composes and reworks poems that come to him from his observations around him. Before he begins his bus driving shift, he writes in his “secret notebook,” and we can see these words flowing across the screen as Paterson silently recites them.  While driving the bus, Paterson listens to his passengers, their conversations and interactions, and we watch the quiet action in the bus unfold: people on their way to work or school, staring out the window, observing the cityscape around them, or talking among themselves.  Here, the bus becomes an emblem of inner exploration, that quiet time of meditative encounter while traveling from the private world of home to the public world of work, and Paterson drives the bus that makes this journey, a kind of Charon for the living.

At home, Laura, Paterson’s girlfriend, is completely untethered to any routine. She is always looking for ways to make things unusual: she paints over linens and curtains and her own clothes with patterns of black and white circles, she decided to begin a cupcake baking business (and the cupcakes are decorated with black and white circles too), and then she wants to become a country music star.  She cajoles Paterson into letting her buy a guitar outfit she finds online–money is an issue, but Paterson wants to make her happy–a “harlequin” model, weirdly also black and white, and she spends all day learning the first three chords of  “I’ve Been Working on the Railroad.”  She cooks unusual combinations of food for dinner–brussels sprouts and cheddar cheese pie–which Paterson politely chokes down, not wanting to disappoint her.  Her blithe, free-spirit anything-goes ethos contrasts with Paterson’s invariable set schedule–his walk to work in the morning and evening, the way he fixes the tilting mailbox every day when he comes home, walking Marvin to a neighborhood bar and the one beer he has every night.  And yet within the constraints of this modest, predictable life, Paterson engages with life around him.  He is the city, its people, its history.  His poetry links together the routine of his day, and his imagination becomes the way he makes the commonplace majestic.

The entire movie is actually like a poem itself.  Afterwards, my very rational scientist husband was perplexed–what was the movie about?  Why didn’t it make sense?  And despite the framing device that Jarmusch uses, a week in Paterson’s life, the story is not exactly linear.  There is some rising action, some conflict, some bad dog behavior, and Paterson’s final redemption, but plot and narrative are almost hidden within the framework of the ordinary a little tilted on its head: the story becomes more about the characters in the movie, their oddness or their equanimity, than what exactly happens. Just as a poem is more about the sensations and metaphoric imaginings that its words create, Paterson the movie is more about what these characters make us feel about them,

Jarmusch is also obsessed with twins, many of whom walk through perfectly framed shots for apparently no reason, random coincidences–the many Patersons, the bus driver, the city, the William Carlos Williams poem–and a Japanese poet who shows up at the end, almost like an angel sent by a poetic God to bring the dejected Paterson back to writing poetry again, whose charming difficulty with the multiple “w’s” in William Carlos Williams points to the way language tries to but never succeeds in separating those of us who seek out the transcendence of poetry.

I’m very glad that I had a chance to see Paterson, and I would highly recommend it if you haven’t seen it already.  Jim Jarmusch studied with Kenneth Koch at Columbia, and his reverence for modernist poetry is completely apparent here.  Even as a movie about the ordinary life of a bus driver, Paterson– via Jarmusch– is making a statement about the kind of ordinary, small-city life that nevertheless has vigor and importance and imagination–we all share this, for this is what makes us human.

2 comments on “Paterson: the movie, the poem, the place”