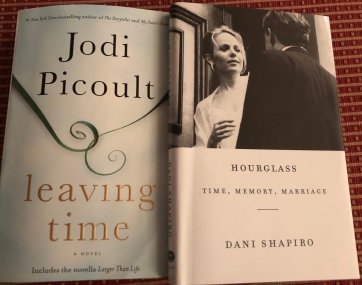 I was about halfway through my Jodi Picoult novel at the start of the challenge, so I finished that book, and then went on to complete Hourglass by Dani Shapiro.  The books were similar in that they both explored family, parenthood, relationships and life stories, and I enjoyed them both very much.  They differed in that Picoult’s book is fiction, and Shapiro’s book is a memoir.

Leaving Time, by Jodi Picoult was given to me by my teenaged son for Christmas.  He spent time walking around the bookstore, searching for something that he thought I would be interested in.  So, before I even cracked the cover, I loved the book because of the care and thought that he put into choosing it for me.  This was my first Jodi Picoult book, and I quickly fell into the rhythm of her story-telling and got very caught up in the mystery that was unfolding.

The book is about a young girl (Jenna) whose mother disappears when she is three years old, and her journey to find out what happened.  There are lovable characters, including a washed-up psychic named Serenity and a burned-out detective named Virgil.  The three become quite a team, as they uncover bits and pieces of evidence leading them toward the missing Alice, who is an expert on elephant behavior.  Alice spent her career studying elephants, with a focus on their grieving process and the matriarchal order of the elephant tribes.  Alice and her husband, Thomas (Jenna’s father, and also an elephant expert) fall in love and operate their own elephant refuge in New Hampshire, where the story becomes complicated, involving the other workers on the property and ultimately leads to the disappearance of Alice, a possible murder, and Jenna moving in with her grandmother.

I will leave it at that, as I don’t want to give away too much of the story, but I found the novel to be a page-turner with twists and turns that kept me on my toes, and it was a perfect way to start the challenge! (208 pages– book was 405 total)

My second book was called Hourglass: Time, Memory, Marriage, by Dani Shapiro.  I can’t recall exactly where I came across this book, but as soon as I saw it, I knew I needed to read it.  It is a memoir of her 18 year marriage, and was really very excellent.  I was astounded by the similarities between her marriage and mine, and her personality shone through the pages – I felt like I was reading my own words.  This book is filled with wonderful quotes, honesty and was so incredibly relatable, I had a hard time putting it down.  It is actually the kind of book I will want to re-read, just to pick up on the subtle moments that I knew were happening but may not have made it fully into my consciousness. (145 pages)

So, two wonderful books to get me rolling, and now back to my stack!

View all posts by meredith