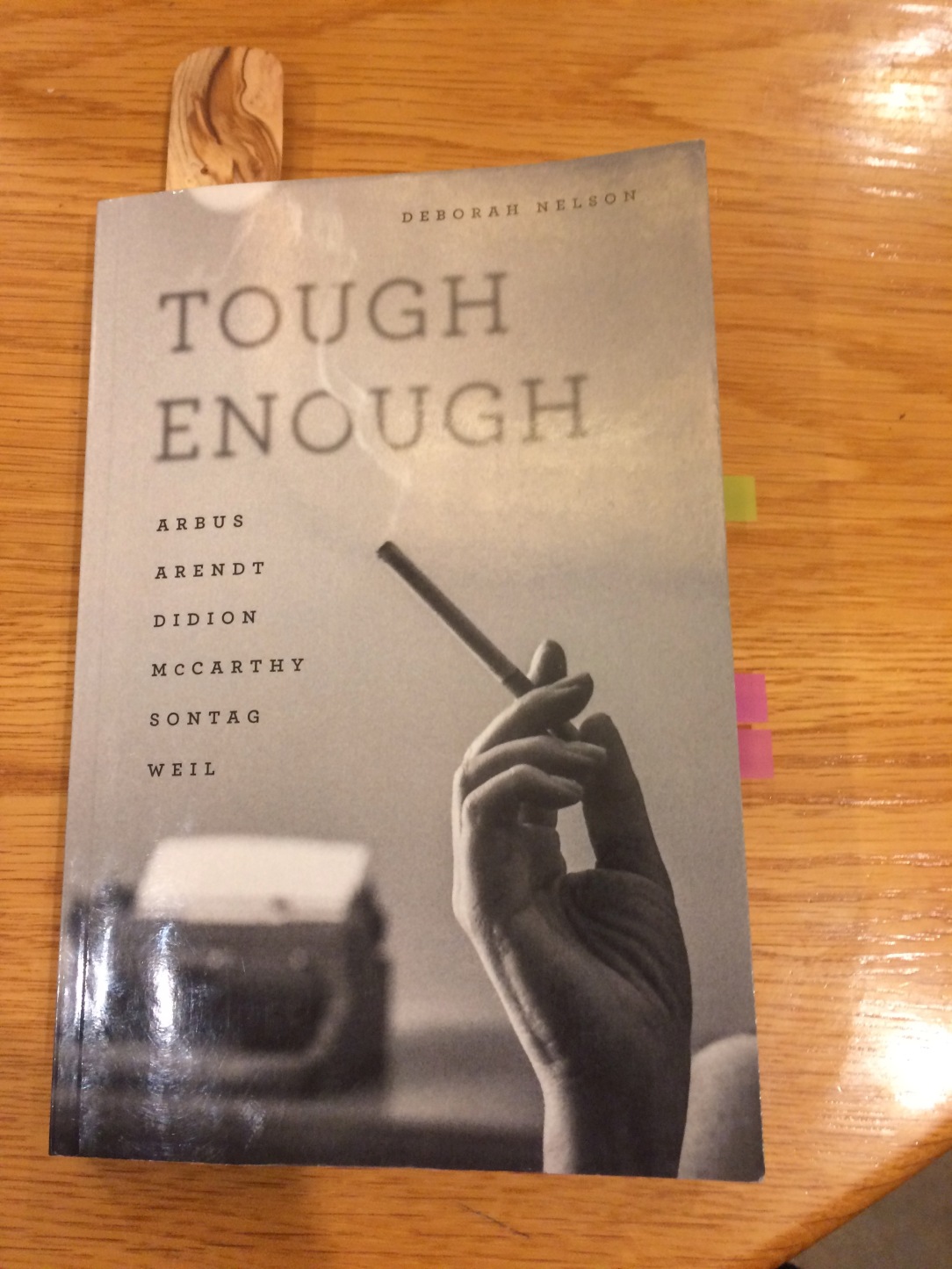 And Yes It Was Tough Enough To Read

After about the first fifty pages or so of Deborah Nelson’s Tough Enough: Arbus, Arendt, Didion, McCarthy, Sontag, Weil, I realized that my reading had slowed significantly, not just because the pages are very long and the typeface is very small, but also because of Nelson’s dense, carefully calibrated sentences that hold so much information that they are like a continuous series of mini-lectures. Here’s an example: “Therefore, when Sontag says in 1975 that the 1960’s made politics “interesting again,” she indicates that the sixties both animated politics and reanimated the Romantic drama of individuality, emotional intensity, and powerlessness that she had come to find so disturbing” (116). That sentence does a lot of work in telling me many things at once, most of which I didn’t know at all, and all of which I had to stop and think about before moving onto the next information- holding- pen masquerading as a sentence.

And there was much that I didn’t know about in this book. I have never read Simone Weil nor know much about her kind of religious asceticism that pushed against the more mass consumerist religion of Norman Vincent Peale in the late ’50’s and “60’s. And I know little about Mary McCarthy’s writings beyond Memories of a Catholic Girlhood and The Group, both foundational works.  And so I was at sea a bit in reading Tough Enough, though Nelson’s concise (though often complicated) analyses of both the cultural moment each of these writers emerged from and their specific works helped to fill in my very large gaps.

Nelson’s premise in examining these writers is that they were all systematically branded as “difficult” and uncompromising, qualities that made many critics and readers uncomfortable. Each of these six had to endure criticism that they did not write “like women” in sticking to safer, more pleasant topics to write about, but instead had to develop a kind of literary toughness that made their writing possible. They wrote about truth and the world, not as it should be but as it was, and so were often regarded as shrill or unfeeling because they wrote most often from an objective (and perhaps more traditionally masculine) perspective. Nelson also shows how many of them knew each other, though warily, in a kind of literary symbiosis that resulted in mutual benefits to their writing.

Nelson writes clearly about Susan Sontag and her dense, thorny almost philosophical prose, reminding us of what she writes in “Against Interpretation” that “the function of criticism should be to show how it is, what it is, even that it is, rather than to show what it means” (117)> And empathy, to Diane Arbus and her disturbing photographs, was something she did not subscribe to, which at the time her work was being exhibited in the sixties and seventies perplexed many critics and observers: “Perhaps she meant less the hidden and socially marginal people that she photographed than the reality we normally overlook in an effort to be nice. Empathy for her seems to be a way not to see the other–a form of good intentions that collaborates in making the other invisible” (134).

The chapter on Joan Didion is especially worth reading. Nelson begins with Didion’s most un-Didion-like book, The Year of Magical Thinking, in which she drops the toughness of her previous works within the emotional devastation of her husband’s sudden death. Nelson revisits Didion’s essay “Sentimental Journeys” which is a prescient and crushing critique of the Central Park jogger case, all the more relevant to the current occupier of the White House’s counter-factual opinion about who the actual perpetrators were.

Tough Enough is only 174 pages, but it will certainly be the one book I read during this challenge that took the longest amount of time to read. It’s more of a text for a course than an easy read, but investing the time to read it I felt was worthwhile, if only in reminding me how much I don’t know about these iconic writers, artists, and thinkers. Now I have to go back and read their works, so more books, more reading……

And that funny thing sticking up out of the top of Tough Enough is a wooden bookmark that my California friend Claudia had made for her from the wood of her beloved olive tree that had grown in her backyard for twenty years until a wind storm uprooted it. And so the tree went to making bookmarks and wooden bowls and spoons, reminders of its past. I like to think of the memory of the olive tree is nestling up against the memory of the tree that produced the pages of the book I am reading–a conversation between fallen trees now put to good use.

4 comments on “And Yes It Was Tough Enough To Read”