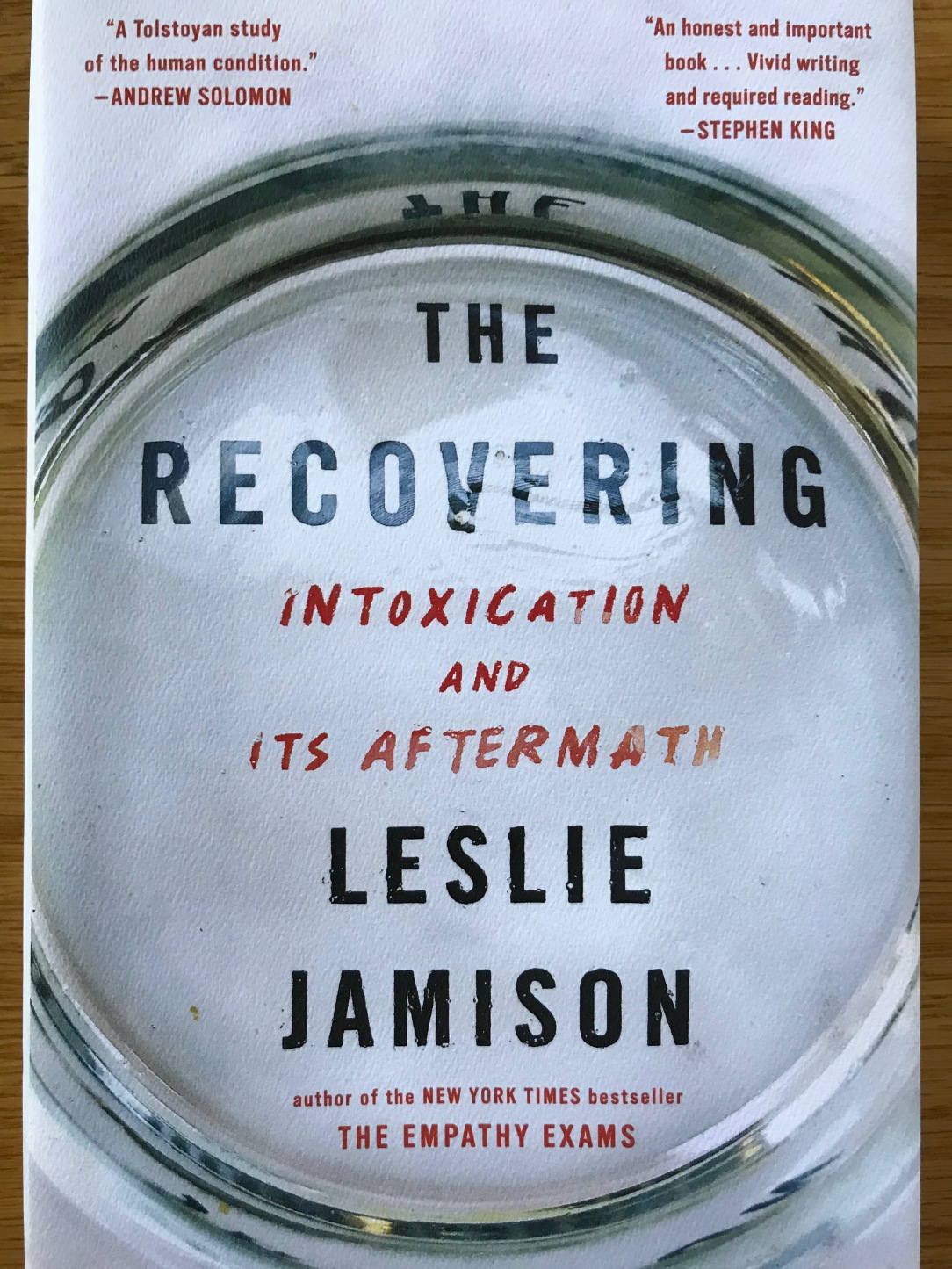 Leslie Jamison’ The Recovering: Intoxication and its Aftermath is a book I’d wanted to read ever since I had finished her earlier book The Empathy Exams and had heard that she was writing a far-ranging examination of her own alcoholism set within the context of the myth of the great alcoholic writer. In these 511 pages, Jamison intertwines her own history with alcoholic dysfunction, in addition to self-mutilation and anorexia, with stories that detail the drunken excesses of John Berryman, Raymond Carver, Denis Johnson, Jean Rhys, Charles Jackson, and Jack London as well as people she meets in AA. And the sheer excess of despair, of which alcoholism is only a symptom, is what made me feel emotionally ragged when I finished this book. Recovery is of course the final outcome–or else there wouldn’t have been this book–but the price paid to arrive at that destination, the hours spent in delirium or blackouts or shame, lives not so much wasted (since hitting the absolute bottom after being wasted is what brings Jamison back to recovery), but instead being in thrall to the tyrannical enslavement of addiction, is just so unimaginably high. This is an exhausting book to read.

I had also read Jamison’s novel, The Gin Closet, years ago when it first came out (and was featured on the New Fiction shelf in the California library I now miss so much) before I had even read any of her nonfiction. This earlier book deals deeply with the emotional fallout of a divided family and the ravages of alcohol that cannot ever be repaired. Here is the beginning of Jamison’s attention to the kind of life that veers into the blankness of drinking, the urge to self-comfort and also self-medicate with alcohol. The Recovering goes into what happens after: after the drinking becomes the life itself.

The particulars of Jamison’s education and career would make all of us envious: Harvard undergrad, the Iowa Writers Workshop at age 21 (the “only” MFA program she was admitted to!), and then Yale for a PhD. The Recovering is based on her dissertation about alcoholism, recovery, and the American writer. And yet she cannot allow herself any slack in acknowledging her abilities; she begins to drink to excess at Harvard because she feels insecure (not realizing that practically everybody as a college freshperson feels insecure), and then her insecurity is further reinforced by being at the Iowa Workshop, bathed in the mythology of the drunk (almost always) male writer–“I idolized the iconic drunk writers because I understood their drinking as proof of extreme interior weather; volatile and authentic. If you needed to drink that much, you had to hurt, and drinking and writing were two different responses to that same molten pain. You could numb it, or else grant it a voice (29).”

Jamison’s narrative is driven forward with the story of her own relationship with Dave, a man who tries to hold her together while she is drinking to extreme. Sobriety first becomes Jamison’s attempt to resuscitate their coupledom, but ultimately his sacrifice is too great. Jamison must learn that to be sober is not to expect that everything you lost will come back when you stop drinking. There is no such thing as a “contract economy” when dealing with addiction. If I’m good, then he will love me. What must be gained is the knowledge that life itself must be lived with the living, in the community of those who are human and suffer too.

Recovery, then, may not ever be able to repair what has been lost, but it can bring the sufferer back to a different life, one based on community and connection and the telling of our stories. It is the self-absorption of alcoholism that drives the sufferer away from any kind of life at all, and those who cannot find a way to return are the ones like John Berryman and Amy Winehouse who commit suicide because their despair is too deep.

My family, as do so many other families, suffers with a history of alcoholism, and the story of our past and present finds this same kind of despair that has become endogenous, pervasive throughout our family tree, seeping into relationships and tearing away happiness. Reading The Recovering has given me a small glimpse into what it means to recover and how telling stories–these stories that we may rather not hear–can connect us and bring us back to a feeling of empathy, of identification instead of rejection. What I needed to read was Jamison’s close-reading of Joan Didion’s famous sentence: “Recovery reminded me that storytelling was ultimately about community, not self-deception. Recovery didn’t say: we tell our stories in order to live. It said: We tell others our stories in order to help them live, too (371).”

This is a book that needs to be read.

5 comments on “Week 2: The Recovering”