Halfway through The Stand by Stephen King 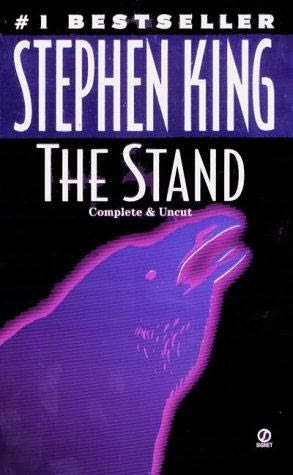 I was starting to feel guilty because I haven’t posted at all this week!! I am trying very hard to finish The Stand by Stephen King but am also slowly Reading Snow. I think I am going to put all my efforts into finishing The Stand before trying to continue reading other works. I am on the downhill of the uncut version, which is nearly 1200 pages. I think I’m on page six-hundred and eighty something.

The first half of the novel is sets up the scene, which is a massive epidemic of flu killing off the vast majority of the United States (and probably the world). There are many plots- many characters- and of course all are connected. The prose in the first half were pretty easy to read, like most of King’s work from what I understand (this is the first fiction book by him that I have read); however, it got a little redundant at some point– almost exhausting, but I think that was the point. If you can imagine being one of these characters, it must have been quite the scene and completely overwhelming.

Now that I am in Book II of the novel, things are moving much more quickly and it is actually pretty interesting to read– I am enjoying it much more than the first half, though I do appreciate the depth with which King writes.

Although the Olympics are incredibly distracting, my goal is to finish reading this book in the next week if I can. If not, I will just be cramming in my last 6 books in less than 5 weeks or something!

Hope everyone else is doing well 🙂