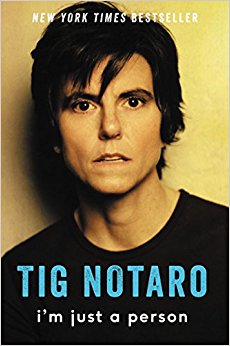 It’s of my opinion the best art (comedy included) comes from a place of honesty and vulnerability. Tig Notaro is a wonderfully deadpan comedian. While she was already a steady working comedian, gradually climbing the ranks of fame, her career skyrocketed almost over night after a historic set where she bravely walked out on stage and greeted her audience with, “Hey, how’s everyone doing tonight? I have cancer. How ya doing?…”

If you haven’t seen it, there is an abbreviated documentary available on Netflix called “Tig”. I’m calling it “abbreviated” because the book goes so much deeper with her traumatic events, while the documentary is a slight shift in focus, dotted with comic relief. It was a little hard to find the comic relief in the book (but i’m not complaining). Since the audiobook is narrated by Notaro herself, her deadpan delivery amid SO MUCH grey material was hard to distinguish between what was funny and what was heartbreaking. Again. This is not a complaint, just an observation on framing. She used cancer in her comedy act. It was funny because she was owning it and framed it as comedy. In the book, it was the retelling of pain on a more personal level. I was crocheting and crying in the middle of a Starbucks and probably looked like such a nutter. I would absolutely recommend this book, but if you don’t get around to it, definitely watch the documentary and her stand-up.

And I’ll leave you with this:

View all posts by Daniela Puliti