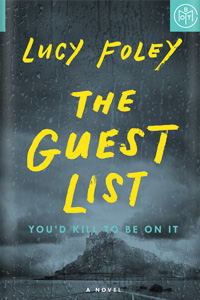 It’s a whodunnit! I haven’t read one of these in some time, and it was fun to read. Thanks @wolfechelsea for the swap! The set up of the book is very enjoyable– the chapters are broken up into the characters with interspersed chapters that were written in third person based on The Wedding Night, which is the premise of the story. On a deserted island in Ireland, a British couple (the bride is half Irish– her estranged father is Irish and ‘part of her reason’ for choosing the location, though he makes quite a speech at the wedding- wow) has a lavish private event, since the groom is a ‘celebrity.’ He definitely thinks he’s one.

There’s a lot of history, secrets, jealousies and other gossip-like details that keep the reader engaged. There is a murder on the island during the wedding– no spoilers!

The way the book is set up you are moving through the wedding weekend in a nonlinear fashion, making each chapter a kind of stand alone perspective that builds. The chapters are all pretty short, too, which made it easy for me to breeze through in just a few days.

If you’re looking to give your brain a break from reality, this book will take you to a spooky old Irish place with people doing weird stuff behind each other’s backs. For example, the bride has a tendency to smash things in a way to release her anger. After an argument with her father on the day of the wedding, she goes back to her room and smashes a vase against the wall, then cleans it up. Explains that she’s been doing this for years but has tried to keep it under control. There’s a lot of interesting character traits that I’m still percolating on early Saturday morning.

Thanks again to Chelsea for giving me a book I would have otherwise never read- I really enjoyed this deviation from my stack!

I forgot I have Jim Carrey’s book, which seems another great opportunity to escape the here & now, and embrace the last week of summer reading.

8 comments on “Week 9: The Guest List by Lucy Foley”