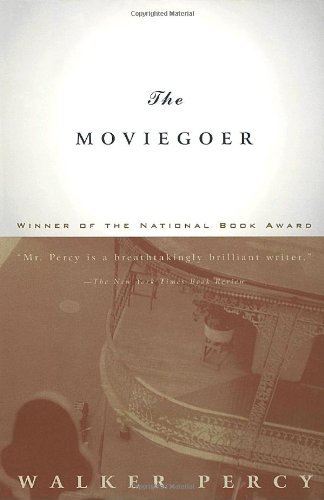 The Movigoer by Walker Percy is from the 1960’s. The story is based in New Orleans, specifically a suburb called Gentilly that is characteristically “boring.” Jack, the main character, lives a boring life there selling stocks and bonds. He is a veteran of the Vietnam war, and he spends his time going to the movies, hence the title. He also likes courting women and his family plays a prominent role in the novel– his aunt, mostly.

It took a little while for me to get into this one, but once I did, I really enjoyed it. Jack is on a ”search” and he lives in Gentilly and not New Orleans proper so as to not distract himself from the search. He tries to live simply so that he can pursue his search. What he is looking for is never stated directly, but it’s something like the truth.

Kate, who Jack has known his whole life, is mentally ill and suicidal. I was shocked– this is the 3rd of 4 books that I’ve read for the challenge that features a suicidal woman. His aunt, Kate’s mother, believes that he and Sam, another relative/friend, can help Kate in her times of need. She is a bit damsal in distress, which was my least favorite element of the book. She isn’t a bad character, but I guess I still am hungover from reading John Green.

A lot of the book is Jack spinning around in his car, enjoying the weather of the South. Visiting his mother and her other children and talking about his dead father.

The story itself isn’t compelling but the way it is written is enjoyable. There’s a lot of irony in this book, which I am a fan of.

I won’t tell you what happens in the last 50 pages, but it’s not terribly surprising! Also, I think this book has been made into a movie but I’m not sure.

I liked reading a male protagonist as a change from many of the novels I’ve been reading over the last year. I was recommended this book by an artist in New Orleans, an older gentleman, who said I’d get a kick out of reading about New Orleans. I certainly did! I look forward to reading more of Percy’s work for sure. It’s a quick read, only about 200 or so pages, and worth the time.