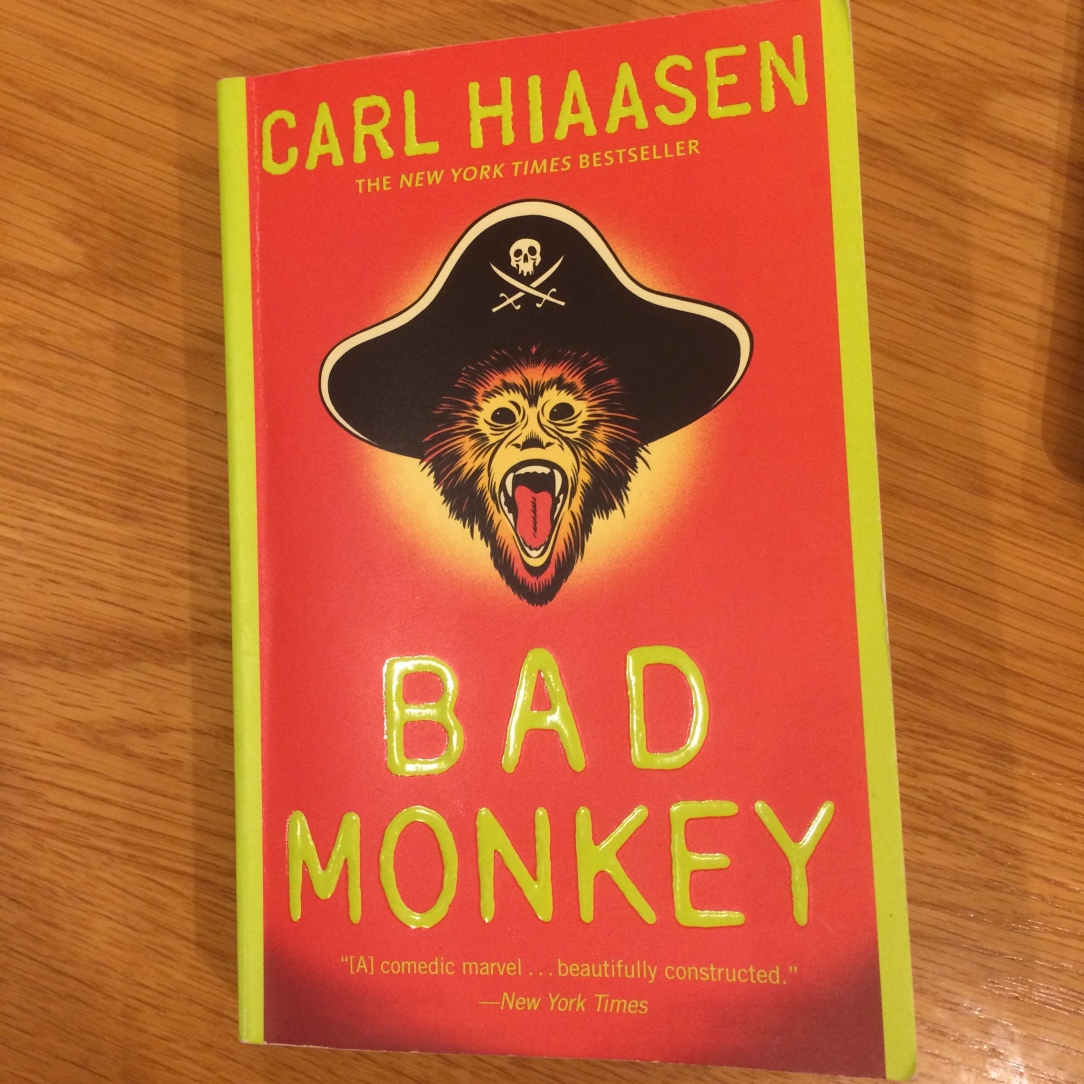 Here, finally, is the comic relief I’ve been needing practically since book #1.  Carl Hiaasen’s Bad Monkey came to me in the book swap, and while the novel is not one I might have chosen voluntarily, it had been highly recommended by a former writing teacher of mine, and so I’m glad I had an unexpected chance to read it after all (though now I wonder about what this teacher was saying to me by recommending this book!)  One very important warning: do NOT do what I did and start reading this book while eating breakfast.  Or any meal.  Or within two hours of eating anything, especially in a restaurant.  You will instantly regret it, since the opening line contains a description that is sure to make you toss your cookies: “On the hottest day of July, trolling in dead-calm waters near Key West, a tourist named James Mayberry reeled up a human arm.”  Things just get worse from here.

The novel takes place in Key West, Miami, and a tiny island in the Bahamas, and involves an ex-detective, Andrew Yancy, who, on his own, investigates the appearance of this human arm and the fraudulent activities surrounding its discovery as a possible way to get reinstated in the Key West police force.  Because of a very graphic (and almost frat-boy silly) incident of jealous rage that involves a dust buster and his victim’s posterior, he has been demoted to restaurant inspector.  Unable to sink so low as to accept bribes, he uncovers horrific infestations in every restaurant he inspects (all described by Hiaasen in unsettling detail), in addition to expressing outrage when a developer begins building a spec house that blocks his view of the water that he sees from his own house.  The “bad monkey” of the book, Driggs,  is in some ways Yancy’s alter ego, though Driggs also represents the cruelty caused by exploitation and greed, and Hiaasen uses his appearances as a plot device, tying together the action in Key West with everything that takes place on the island.  Driggs also causes some serious mayhem and physical pain to everyone unlucky enough to encounter him, though (note to PETA) he finally is treated well in the end.

There is some very intricate plot structure here, and a story that will have you racing through the almost 400 pages.  Bad Monkey deals with fraud, environmental degradation, smuggling, voodoo, autopsies and self-mutilation (don’t ask!), real estate, tourism, and fishing.  Hiaasen does a great job in capturing the island patois, and his characters, though sometimes coming close to caricatures, are all lively and well developed.  I even learned a new word, “poleaxed” which means to cause great shock to someone.

This book certainly poleaxed my digestive system with all the squalid and disgusting things Yancy encounters in his journey back to the good graces of the police force by solving the mystery, so if you are indeed interested in reading Bad Monkey, just make sure to have plenty of bicarbonate of soda at your elbow, or better yet, read it far, far away from the kitchen table!